St Vincents won the Boys U15 cup for the first time since 2017, beating pre tournament favourites and current holders Corrib in the final. The sides met on the first day of the competition after been drawn together in the same group with the Galway club winning 9-2 and advancing to the semi final as group winners. Corrib went on to beat their clubs second team in the semi final (16-3) while St. Vincent’s faced group B winners Newry in the other semi final where they progressed after a close 5-4 win.

In the final it was the Dublin club who came out on top 6-3 pulling away in the last 2 quarters to win their 7th U15 title. In the 3rd/4th playoff, Newry came out on top (6-2) against Corrib B to win the bronze medal.

Boys MVP of the tournament was Fionan Byrne (St Vincents)

Tribes retained the girls U15 cup that they won in 2021. The Galway club won all of their group matches against Cathal Brugha, Bangor and Half Moon to progress to the semi final as group winners where they beat runners up of group B St Vincents 10-4. In the other semi group B winners Clonard beat Bangor 10-2.

In the final Tribes continued their winning streak over the weekend to beat Clonard 15-5 to claim their 5th U15 title in the last 10 years. In the 3rd/4th playoff St Vincents claimed the bronze medal with a 12-2 win over Bangor.

Girls MVP of the tournament was Lydia McNichol (Tribes)

A big thank you to all of our referees, table officials, President of Ireland Water Polo Kevin Armstrong who was in attendance for the presentations of medals and in particular to Tournament Director, Eamon Caulfield who played a huge part in both the organisation and running of the tournament.

Also thank you to our pool providers (Kingfisher (NUIG) and Leisureland) who were very obliging and helping in making hours available over the weekend and providing assistance in the set up of the facilities for the competition to run smoothly. 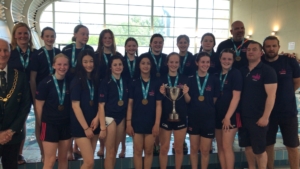 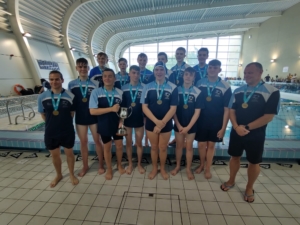